A good trend in movie making will accelerate with digital projectors 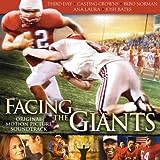 Recently our family went to see "Facing the Giants" and really enjoyed it. The acting was uneven, but overall a very toucing movie. The movie is particularly interesting because it shows the trend to smaller budget grass roots films. "Facing the Giants" was made for only $100,000 but has done extremely well at the box office due to word of mouth.
This trend toward the masses being able to make films will accelerate drastically once digital projectors are common in theatres. Without the cost of printing the actual film, anyone with a digital camera and a Mac could make a movie, and with enough buzz get it into theatres.
Posted by Mitch Fincher at 8:31 PM No comments:

Recently I switched hosting companies to dreamhost.com for cost reasons. I can get a terabyte of bandwidth per month for only $10, pretty amazing. If you enter my promo code, "mitchfincher" when signing up, they will waive the $50 setup fee so you can start for only $10 and cancel anytime. The only downside is the reliability is not as great as some other hosting companies. I've had two short outages in the last few months, but for $10 its been a great deal. Also they are Ruby on Rails ready.

Four ways to play with SqlExpress

You can connect to a SqlExpress instance in many ways.

2. You can also download the free SqlExpress tool from: http://msdn.microsoft.com/vstudio/express/sql/
by clicking on the link to "SQL Server Management Studio".

4. To connect through the command line osql program
osql -S"mymachinename\sqlexpress" -Usa -P"mypassword" -Q"CREATE DATABASE SD20"
Posted by Mitch Fincher at 8:30 AM No comments:

Best thing happened to me this month...

Best thing happened to me this month was my cell phone died. I was forced to upgrade to a wonderful TMobile MDA (which stands for "Mitch's Digital Assistant"). The MDA replaces two and half devices of mine - old phone, old IPAQ, half my camera.

This morning my friend Frank showed me the Opera browser for it. It's amazing, wonderful. Now I can't live without it; couldn't think of going back to the pre-installed pre-cambrian IE browser. The cool thing is you can read a page like slashdot.com into one tabbed window while downloading links from that page into other tabs to read later - no more waiting for further pages to download, they download in the background.

Sometimes it's a happy thing when devices die.
Posted by Mitch Fincher at 10:46 AM No comments:

"We have considered ourselves of too much importance in the scale of nations. It has led us into great errors. Instead of yielding to circumstances which human power cannot control, we have imagined that our own destiny and that of other nations was in our hands, to be regulated as we thought proper."

(Remember that in the War of 1812, the White House is burned and the USA is fortunate to get a stalemate from the war).

I meet with a bunch of other guys about once a month to have dinner and discuss a historic event. This month's topic is the Mexican-American War. If you're in Austin on Tuesday Novemeber 28th come by and join us. Email me for more info, my email addresses is on www.fincher.org
Posted by Mitch Fincher at 3:02 PM No comments:

Great new creation from my old Ala Mater, Texas A&M at New Scientist.
The cotton plant provides a wonderful fiber for our lives, but it's poisonous seed protein is under utilitzed as cattle feed. Keerti Rathore has manipulated the genome of cotton to remove this poison. Now farmers from developing countries can earn cash for the fiber and use the seed to feed their families.
This is just a hint of the wonderful, fantastic, and dreadful fruits of the new science of the genome. The biotech revolution of the next 20 years will make the computer revolution of the last twenty years look like a child's toy. The revolution is coming, let's prepare for it and not squash its promise of filling the bellies of the world's hungry children.
Posted by Mitch Fincher at 11:04 AM No comments:

A couple of web site picks

www.catsthatlooklikehitler.com made me laugh. The name says it all. I like the idea of having a whole community evolve to discuss the ethics of it all. Very web2.0.

For laughs try the humor section of http://www.stumbleupon.com. StumbleUpon is a great idea and a lot of fun.
Posted by Mitch Fincher at 8:44 PM No comments:

I was two chapters into the "Agile Web Development with Rails" book and thought, "Why not create a web site?"
Hence the birth of www.CleanJokesForKids.com. It's not pretty and needs lots of stuff, but its there now. Kids can type in their favorite joke and rate other kids jokes. You can see the jokes filtered by the funniest, latest, or worst.

I've been very impressed with how Rails speeds development.
Posted by Mitch Fincher at 9:45 PM No comments:

I'm trying to recover all my email from a web mail hosting site that doesn't support pop3 without a fee. I've tried a few of the obvious ideas and nothing worked. I finally found that the url listed in the 'view' mode has a direct url to the message. I don't have wget on my windows box and didn't want to download a version so I thought, "How hard could a subset of wget be to write in Ruby to download all my email?" Answer: Not hard.
This will get a particular page and print to the screen:


This will read a file of urls and print all to the screen:

Posted by Mitch Fincher at 8:25 PM No comments:

A potentially important breakthrough in energy production was announced by lbl labs today.
Researchers have discovered the structure of how plants convert sunlight into usable energy.

If we could manufacture these structures and place them in water-filled panels, sunlight could be directly converted to hydrogen. This would short-circuit the bio-fuels path by going directly to hydrogen instead of cultivating crops. This would be more efficient and require no fertilizer or cultivation. An added bonus is that the hydrogen gas can be stored and used when needed, unlike solar cells.
Posted by Mitch Fincher at 11:10 AM No comments:

I went to Austin InnoTech today and here are the jumbled mess of notes taken on my cell phone.

Soyring from IBM speculated that the Paper Industry might be threaten by Organic Light Emitting Diode "newspapers". These are printed once and then updated daily from an embedded chip.

The Baby Boomers retiring and there are not enough replacements for all the high tech workers.

Labor arbitrage in India and China coming to an end as labour cost there are rising.

Starbucks pays more for health care than for coffee beans.
We need a single standard for health care records that are kept by the patients to avoid misdiagnoses from doctors without the complete health picture.

David Smith vp Technology Futures
The average cell phone is replaced every 11 months.
1/2 of our economy comes from industries just l0 yrs old.
More people read newspapers online now than the carbon based ones.
We are leaving age of physics entering age of biology.

In 2001 the US spent more on tort litigation than on R&D.
Most Companies make tech decisions by looking in the rearview mirror

Kert Peterson on Scrum.
Scrum is a project management frame work not a software methodology.


Scrum 4O% turnover is common in an organisation transmuting to Scrum. People are held accountable daily and some don't like that.


Vista preview by Kevin Remde
A funny thing happened during Kevin's preview of Vista - a popup window appeared and informed us that it was checking his digital rights for playing a video in the background.

Vista's Search tools can search new tag words of documents. In the properties dialog box is a field for attaching tags to a document. This looks interesting, but I don't know how many people will have the patience to enter these.
I liked the ability to go back to previous versions of a document.
Vista can use a USB memory stick as virtual memory, which kinda makes sense since it could be faster than a disk drive.
Finally, low priority background tasks will be given lower priority for I/O, making the experience better for the user.
Vista has hard drive failure detection like John Gibson's SpinWrite.

Overall I was impressed with the demo of Vista - it's catching up to the Mac in so many ways. But like many Microsoft projects it's dissappointing in how little they have progressed.
Posted by Mitch Fincher at 6:51 PM No comments: