Should you estimate with hours or Story Points when starting a scrum?

I've done both here in the great state of Texas and here's my thoughts: 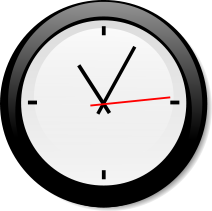 Starting out I always liked hours.  Hours are comfortable, you can understand them, and they are  simple.  How many hours to make that widget?  Seven.  Easy.   You can touch hours, look them up in the dictionary, and explain to your boss what an hour is.  But "hours" have a dark side.

At the beginning of a sprint, we estimated we could work 6 hours a day,  with 2 hours for email and meetings.  How many stories can we put in a sprint?  Well, we've got two weeks, that's six hours times 10 days equals 60 hours of work per developer.

But our estimates were always way low for the work, about half of what they should be.  Frustration mounted as we missed features due to poor estimations.   Slowly, like a rattler sneaking up on a rat,  I realized the problems with estimating in hours.

When estimating hours we miss these eight bloodsucking ticks:

1.  Additional parts of the task we didn't think about.

2.  Some tasks are harder than we thought.

3.  Task Interruptions.  "Hey, I know you are in the middle of a scrum, but production has this huge problem and the big boss says to drop everything and fix it now."

4.  Unexpected tool problems.  At the most inopportune time, your drive will crash, Visual Studio will get corrupted, and the new guy will demolish the entire Git repository.

6.  Developers are natural optimists.  "I really can do that in seven hours."

7. Pride.  You don't want to look bad in front of the ScrumMaster (tm)  and other developers, so you estimate low hours.

8. No time for bug fixes.  QA will find bad code, but we don't estimate time for it.

After seeing hours not working well we switched to story points.  How much is a story point worth?  We started with a rough guess of half a day.  (I know story points are suppose to be complexity, but, ... yeah, whatever, we started with two a day).

After a few sprints we got our velocity - about one story point a day - and it worked well.

The magic of story points is that they subsume the 8 Bloodsucking Ticks of Estimation into them.


Posted by Mitch Fincher at 7:32 PM No comments:

Looking for the cheapest electric rates in Texas?  The shocking truth is that it's not easy.
Start by visiting http://www.PowerToChose.org.

This will list the "cheapest" plans, but it's not quite that simple.  Companies have hidden costs, like a surcharge if you don't use 1,000 Kilowatt-Hours in a month so you just can't get the lowest price per KWH.

Here's a simple three step strategy for finding the best price for you.

Step 1:  Find out how much electricity you used each month for the last year.
You can find this by looking at your old bills, or, if you have a smartmeter, visit https://www.smartmetertexas.com .

Here's my chart from SmartMeter.com from last year: 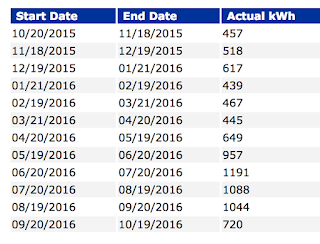 Step 3:  Call the companies with a rating of four and five stars that seem to have the best rates from PowerToChose.org and ask them to tell you how exactly much a month with your average usage in those bands would be.

(Make sure their numbers include everything except taxes.  Two reps on different days from one company quoted me just the "electric charge", and neglected the $9.99 penalty for not reaching 1,000 KWH in a month until I asked if it included that charge.)

Then multiple those monthly rates times the number of months in that band to get your yearly cost.

For my usage patterns the best offer I found was from https://www.greenmountainenergy.com.

Step 4: Have someone else do the heavy lifting.  A few options:

A.  Spreadsheet at www.xlhelp.com/Excel/Electric.htm .  It only works in Excel, and I use a Mac, so I cannot verify if it works, but it does look promising.

B.  EnergyChoiceExperts.com will tell you the cheapest plan based on their algorithms.  The cost is $35, but can easily save you that money.

C.  GeekYourRate.com/ will also calculate your best plan.  It's free for a while and they will charge money soon.  It's a beautiful website with wonderful graphics and an easy to follow process to get your best rate.
Here's a pic of my results: 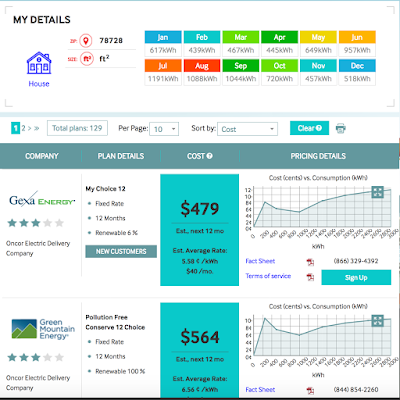 Additional notes:
1.  At the PowerToChose.org web site you can get the exact formula the company uses for the different plans.  I tried to calculated what the customer rep should quote me before calling.

2.  It appears every company in the OnCor  region has to pay OnCor $5.25 base plus