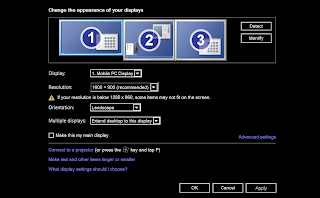 I love gaming as much as the next guy and wanted to make sure everyone knew about this hidden gem in Windows 7. To play this game you need a Windows laptop, a docking station, and multiple monitors. The game is called "What Monitors Will Windows Recognize Today?" (WMWWRT, pronounced Wim-Wart). Whenever a developer walks in the office in the morning, we all gather eagerly around them as they dock their laptop and bet on "heads", meaning windows will recognize all the monitors - at the correct resolution from yesterday, or "tails" meaning the OS won't have a clue about yesterday's settings. This is a great team building activity. Often we try to correlate why it recognized the settings - was it the low barometric pressure, the phase of the moon, the price of Microsoft stock? Great hilarity ensues as we try to delve into the mystery that is Wim-Wart.
Posted by Mitch Fincher at 7:00 AM No comments:

Natural Gas to Gasoline at Half the Price 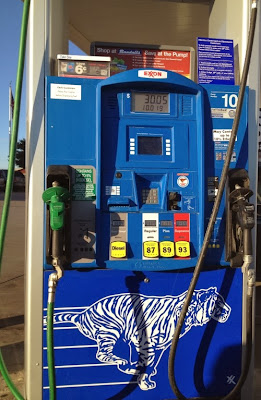 Imagine if we could take cheap, plentiful natural gas, stir in some pixie dust, and turn it into gasoline.
A startup Siluria thinks they have the magic dust to make that happen. Siluria takes natural gas and through a process using proprietary catalysts, converts it to ethylene (C2H4) which can then be converted to gasoline at half the price of current gasoline.
If Siluria can make the catalyst cheap enough and it lasts long enough, it will change the landscape of the oil industry and political world. Then, with the additional oil from unconventional sources we will get the following:

Many companies have tried this Gas-to-Liquids path and been unsuccessful. Many are trying right now.
I'm rooting for Siluria and hoping they will be able to realize its dream.
This will buy us some time until ultra-capacitors can be designed to power our electric cars of the future.
Posted by Mitch Fincher at 7:05 PM No comments: