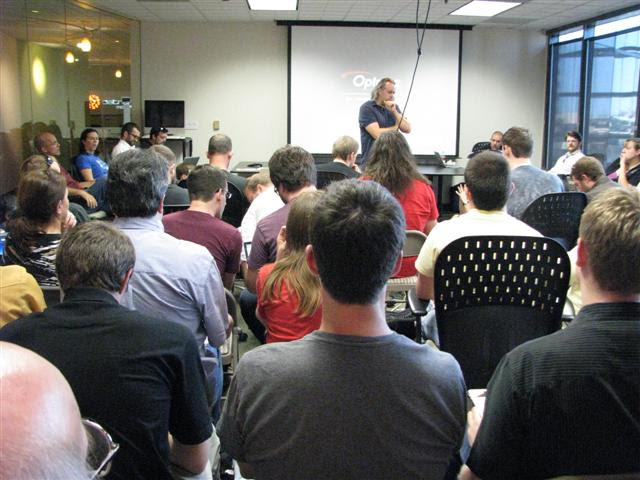 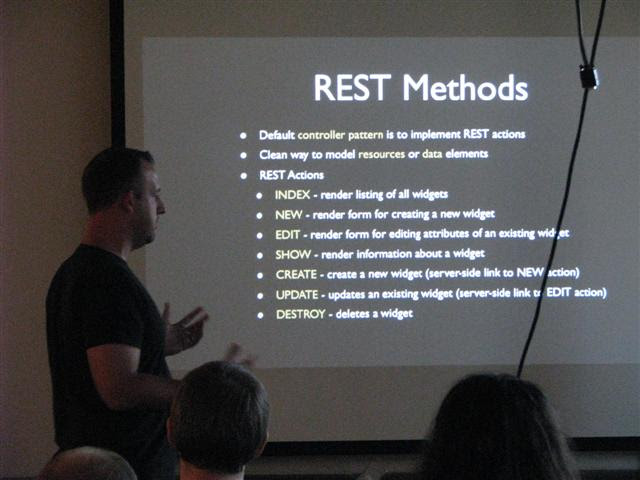 Eighty-five people packed into the space at Datran to hear speakers talk about the basics of Ruby on Rails. Six people were looking for jobs and nine companies were looking for people - pretty good odds for good Rails developers.
Posted by Mitch Fincher at 5:14 PM No comments:

Saw My First Nissan Leaf in the Wild in Austin 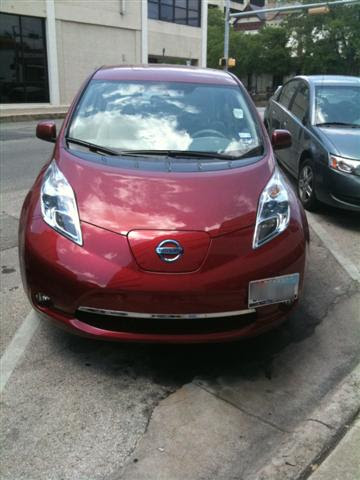 While Frank and I were taking an afternoon walk, we came across the first all electric Nissan Leaf I've seen in the wild. I've been reading about the Leaf and think it has great promise. Awkwardly I decided to take a picture just as the owner walked up with four guys. I introduced myself and the owner, Drew, said he loved the Leaf, got about 100 miles/charge and would buy one again.
The big drawback of course for electric vehicles is the cost of the battery. The Leaf has a 24-kilowatt-hour (KWH) battery rumored to cost between $1,000 to $375 per KWH. This gives the battery pack a cost of $24,000 to $9,000.
The Leaf gets about 4 miles per KWH giving the range of 96 miles. My electric bill is 11 cents per kilowatt-hour giving a cost per mile of about 3 cents. My Camry gets about 27 miles/gal, with gas at $3.60 per gallon that gives a cost of 13 cents a mile for the gas.
Although the Leaf costs significantly less to operate (23%), the extra capital costs of the battery makes the economics a bit murkier - all depending on the future cost of gas.
The future of cars will be electric much faster than most people appreciate. The lithium-ion batteries are getting much better each year with a better price/performance ratio and these batteries will be the bridging technology to a new generation of super-capacitors, the ultimate power storage unit.
Super-capacitors do not store power in chemical bonds, but purely electrical. Super-capacitors can be charged very quickly and will easily last the life of the car. Currently, our capacitors are too expensive, too bulky, and do not store enough power, but that will change. Although it looks like eestor will not pan out, other super-capacitors are being researched and will be brought to market in the not too distant future and we can say goodbye to oil imports. More on the particulars of that in a future post.
Posted by Mitch Fincher at 1:41 PM No comments:

In Visual Studio 2010 the "Find and Replace" Panel Keeps Disappearing

I don't know why, but some days you wake up and things have just changed overnight. You may find yourself in love with a co-worker or realize you really like jelly donuts for the first time.
For me a change happened one morning when the "Find and Replace" panel in Visual Studio 2010 started disappearing after its first use. Very annoying. After a while, really, really annoying. The fix in my case was to open "Tools/Options/Environment/Find and Replace" and uncheck "Hide Find and Replace Window...". I don't know how it got set in the first place, but some mornings you wake up and things are just different - now where is my jelly donut? 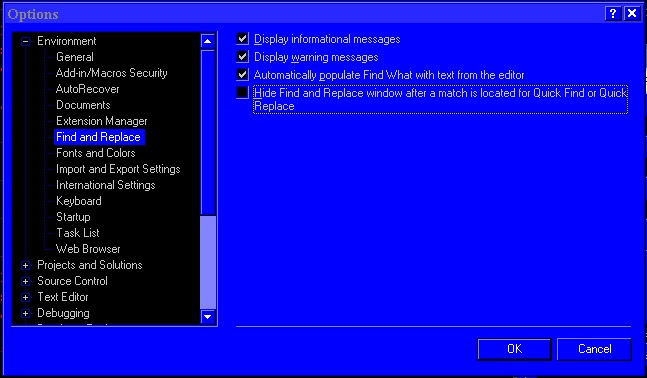 Posted by Mitch Fincher at 8:34 AM No comments: