"You do not have sufficient privilege to access iis web sites on your machine."

While upgrading a solution from VS2005 to VS2010 in XP I got this error:
"You do not have sufficient privilege to access iis web sites on your machine." which was puzzling since I thought I had enough privileges to access iis web sites.
The "solution" to the problem was to execute this command:
which satisfied IIS and the upgrade worked great, well, after I went to IIS, right-clicked on the web site, selected "Properties/ASP.Net" and set the "ASP.NET version" to 4.0.
Posted by Mitch Fincher at 12:47 PM 2 comments:

Email ThisBlogThis!Share to TwitterShare to FacebookShare to Pinterest
Labels: asp.net .net vs2010 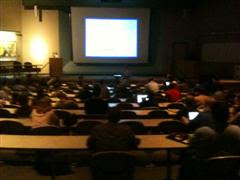 Daniel Guemeur gave a talk to 70 people at last night's Java User's Group. Pizza was provided from Das Keyboard, which was invented by Daniel. (I've used a Das Keyboard for the last few years and love it).
Google Web Toolkit translates Java code to JavaScript so it can run natively in browsers. The advantage is that you can program in a friendlier language and environment than in javascript - debugging with 'Alert's is not much fun.
With Google App Engine (GAE) you can take applications written in Java, Python, or Go and immediately deploy to Google's cloud servers without the hassle of managing and configuring servers.
Interestingly, Daniel said he was moving one of his applications, app.typrx.com, to GWT and GAE from Ruby on Rails. Daniel thought RoR is good for smaller deployments, but that large enterprise software should be done in something like Java on a robust platform. If you have the staff and machines, you can deploy to your own servers in a traditional way, or you can just use GAE. He estimated that RoR development to be three times faster than Java, but that in the end Java is easier to maintain and scale.
An audience member commented that GAE has been a disappointment to some for its lack of robustness. Daniel agreed that its a problem, but that the advantages still outweighed the downtime.
Gerald Cantor talked in the Technotizer time about the CamelOne conference.
Posted by Mitch Fincher at 11:08 AM No comments: