Happy Thankgiving from the Finchers

Thankgiving dinner at the Finchers. The rest of us are busy getting the food ready and Rachel surveys the table. In honor of both our American Indian and Jewish heritage, on the far right we set a plate for Squanto. Posted by Mitch Fincher at 7:15 PM No comments:

Ok, Ok, I know you don't believe me and it's heresy to say such things, but please read on.

In the US we use two-thirds of our 21 million barrels of oil a day for transportation.
If you believe the CIA factbook we import 58 percent of our oil. Let's see, if we do the math, that's 66 percent imported - 58 percent used in transportation, uhm, that gives us 6 percent left over.
The US would be self-sufficient in oil if we replaced the energy in our transportation sector with something else. If the US were self-sufficient in oil production, the price of world crude would collapse.

Any of the following, or more likely combinations of these, will make this happen:

1. Electric Cars. Electricity is much cheaper than gasoline to power cars. Electricity can be produced domestically in the US from solar, wind, geothermal, biomass, wave, coal, or nuclear. The problem with electric cars is the battery. Batteries today are too expensive, too heavy, and have too short of a life span. That is changing. If any of many competing successors to our current battery technology pan out, the electric car will replace a majority, but not all, of our petroleum-based vehicles. Things like supercapacitors from technology by MIT, GT, RPI, EEStor, or EPod, could easily make the electric car viable. Incremental improvements to our lead or Lithium batteries may work. 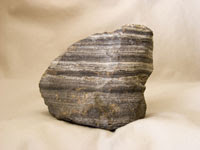 2. Shale Oil. Colorado has three times the energy of Saudi Arabia, but it's locked up in rock. Shell oil thinks it has a way to produce the oil for $30 a barrel.

3. Coal. Coal can be converted into liquid fuels for about $35 dollars a barrel. Germany, Japan, and South Africa have all done this. These technologies have not been pursued in the past because oil was so cheap. Who wants to invest billions in a refinery to make $35 oil when it may drop to $20?.

Many other technologies like cellulosic ethanol, biodiesel, methane hydrates may also work.

If OPEC will just keep prices high for the next decade, people will invest in these alternate technologies and eventually the price of crude oil will collapse.
Despite what all the "peak oil" supporters claim, these alternate technologies will force the cost of oil to be only $30 a barrel in 30 years.
Posted by Mitch Fincher at 9:08 AM 2 comments:

I just saw a great video about training crows to collect discarded coins. 215 million dollars worth of change is lost in the US each year. This guy built a vending machine that dispenses peanuts to crows in exchange for them finding coins in the streets. What a great thinking-outside-the-box idea to get crows to do work for peanuts. When can I buy a machine for my neighborhood? Or should I build and start selling them?

Posted by Mitch Fincher at 9:00 AM No comments: 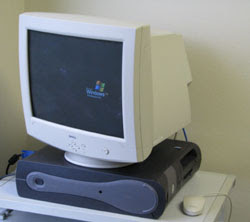 Cathode Ray Tubes (CRT) monitors are the old fashion kind with a depth of 15 to 30 inches. Internally an electron gun shoots a beam of electrons to hit tiny phosphorous dots, or pixels, on the screen. Each dot glows when hit by electrons, but quickly fades so the gun has to "repaint" each pixel. Sixty times a second (60Hz) is usually the lowest "refresh rate". The brains of most people just smooth this flickering out so it looks like a solid image. For those at risk of headaches, their brains work faster and can "see" the flicker. The flicker is interesting and exciting to the brain - too exciting. The result is a cascade of electrical impulses overstimulating the brain.
To solve this problem with CRTs may be easy. You can tell your computer how fast to refresh the screen. In the best of all worlds, just set the refresh rate to 85 or 100Hz and you're done. But not all computers can generate a signal that fast and not all CRT monitors can handle that speed. In windows XP, right click on the background of the screen then select "Properties/Settings/Advanced/Monitor". Set the refresh rate as high as it will go. I made a youtube video to walk you through the steps. If Windows says your monitor is of type "Plug and Play" you may need to install a specific driver for your monitor to get higher refresh rates. 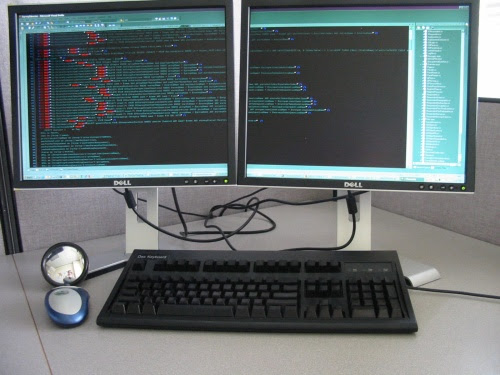 Liquid Crystal Display (LCD) monitors work in a different way. Each pixel on the screen has a tiny red, green, or blue "filter" in front of the pixel. When the pixel's shutter is open the backlight shines through the filter and lights up the pixel. When the shutter is closed, no light gets out and the pixel is dark. The Windows XP/Windows 7 refresh rate means how fast this shutter can open and close. Unlike a CRT, this refresh rate on an LCD does not significantly affect headaches.

The problem may be with the backlight. In most LCDs today the backlight is a Cold Compact Flouresent Light (CCFL). The problem is that these CCFLs can cause headaches. I used to think it was because the frequency was too low, but according to Andrew's comment below, the refresh rate is in the kilohertz range - far too high to be a problem. Perhaps it is overlap between the multiple CCFLs in a monitor? Some LCDs have four CCFLs, some have 6. I will be doing some more research into this and update this post. [I did the measurements and the CCFL does indeed create light at low frequencies in the 60 to 70Hz range. See http://www.fincher.org/Misc/HeadachesAndMonitors.shtml for details.]

To solve this problem with your LCD screen you have to buy a new one. But predicting which LCD will work for you is almost impossible. I tried diligently with Dell, talking to many people and no one knew the refresh rate and no one knew who would know. For me the 20" Dell 2007FP gives me a headache quickly, but the 19" Dell 1908FP is fine.

Some LCD screens have an LED backlight - I think some of the Mac laptops do. LEDs can have a true constant on light which is the best thing. Sometimes LEDs are cycled on and off to save energy, but are cycled in the KiloHertz range so it is fine. You are probably much better off with an LCD screen with and LED backlight. Let me by commenting below if you have success with one or the other. 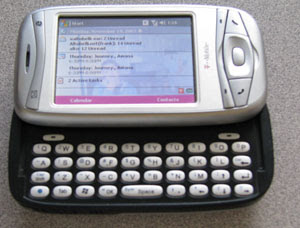 Cell Phones with an LCD screen work the same way with a backlight. It took me months to figure out that my shiny, wonderful new T-Mobile MDA caused headaches. Here again you can't change the refresh rate of the backlight on cell phones, you have to eBay the phone and try again. And it's next to impossible to learn the refresh rate of the phone's backlight. You have to go to the phone store and stare at phones to see if they give you a headache. Your best bet is to find a phone with an LED backlight.

In summary, with CRTs you can set the refresh rate and hopefully get it to 85Hz or 100Hz, with LCDs and cell phones you have to look at them for a while and see if a headache starts.

I'm very excited about Scott Gutherie's new ModelViewController framework. It's very similiar to RubyOnRails, Grails, and Monorails where the three logical concerns of Model, View, and Controller are separated. This separation makes Test Driven Development much easier. In the current ASP.NET world the ModelViewPresenter pattern is used to separate these concerns, but it's a pain.
Cool Features of Microsoft MVP:

Scott's original blog entry is here.
A video from the Alt.Net conference in Silverlight is here and if you can't get Silverlight audio, the wmv file is currently here.
(Yeah, I know you're not suppose to do the "click here" links, but some studies show that using them doubles the clickthru rate).

After the success of Java in the late 1990s, Microsoft did some serious research on the strengths and flaws of Java (one of my fiends was in a Microsoft sponsored focus group about Java). C# was the result - a slight improvement on Java. I'm encouraged that Scott and his team have researched many MVC frameworks and have learned from each.
The MVC framework should be here in a month or so and we can play with it inside VS2008.
Posted by Mitch Fincher at 12:40 PM No comments: