.Net Core 2.0, to include an HTML fragment into a .cshtml page:

To prepare for Dependency Injection in .Net Core 2.0

How to convert a json string to a C# Object

How to create a log4net factory outside of Startup.cs for unit testing.

How to return async task for a unit test

C# -- to get prettyprint of json object with indentation:

To change the prompt in linux:

Posted by Mitch Fincher at 9:24 AM No comments:

Here are my notes for my future reference from Jonas Fagerberg's excellent Udemy Course. I would highly recommend you go buy the course: "ASP.NET Core 2.0"

Startup.cs - Let's get wired up!

To return json data directly to the browser:

To display an IEnumerable in Razor

Data annotations are found in System.ComponentModel.DataAnnotations.

The most common are:

To Add an "Edit" View

Components allow you to inject html from code.

Posted by Mitch Fincher at 12:41 PM No comments:

Shawn Weisfeld, Cloud Solution Architect with Microsoft, gave a great presentation on Azure DevOps to 30 people at Austin .Net User's Group. The video is at usergroup.tv/videos/devops-in-a-cloud-world-2. 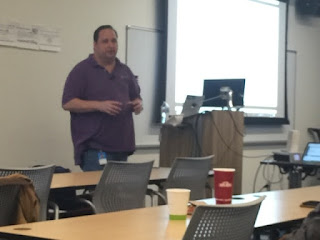 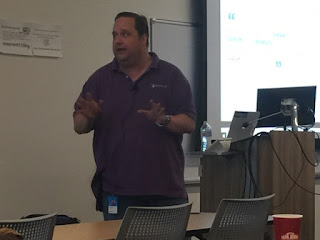 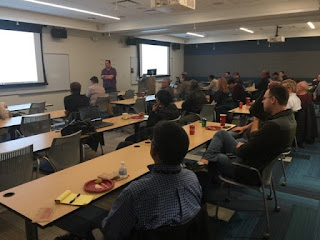 What is Dev Ops? "DevOps is the union of people, process, and products to enable continuous delivery of value to your end users."

He showed a very fun youtube video of Formula One Pit Stop 1950, 2014 demonstrating the promise of DevOps.

40-50% of Azure machines are Linux. Microsoft is taking a strong agnostic stand on operating systems, which is good for the community and good from Microsoft. It's refreshing to see them being even handed with OSes.

Shawn used a tool to zoom in during the demo from zoomit.com

We had a discussion towards the end of his talk about "Infrastructure as Code", meaning you can write code to write the descriptions of containers and them launch those containers, so it's all software.

Posted by Mitch Fincher at 12:37 PM No comments:

Simon Ritter, Deputy CTO, from Azul Systems gave a great presentation to 100 java developers about new things in Java 9,10,11, and 12. Slides are at www.slideshare.net/SimonRitter/moving-towards-jdk-12. 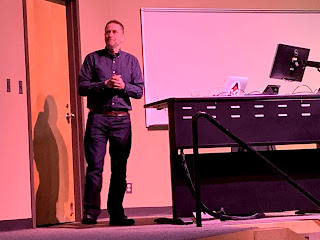 I did java programming 12 years ago and it was great fun to come back to the Java User's Group to see old friends again. Currently I'm doing C# .Net Core work, but I wanted to see what Java has been faring.

TL;DR: My impressions: Java is going to face headwinds with Oracle requiring money for licenses for production versions of JDK and beyond. Especially for small shops it's just easier to spin up a container with all open source and not worry about payments. Many organizations will stick with older free versions of Java (which is where Azul can make some money and help the community), but after a while, do you want to be on older versions of a language while the world is moving forward? It will be like watching ice melt on a 33 degree day, but we will see a slow abandonment of Java.

Java is still playing catchup with C# on features like "var", expanding switch statements, and raw string literals, but it's good to see the progress.

Java Platform Module System (JPMS) (JEP 220) breaks the 4,500 classes in Java into smaller chunks; with Modules you can create a runtime specific for your application only including modules needed for the app.

jlink (JEP 282) creates the java hierarchy with a smaller set of modules.

Instead of a release every two years, Oracle will release new JDKs twice a year, once in March and once in September. With so many releases, only certain ones will have long term support.

In JDK 11, some parts of the JDK will be open sourced like Flight recorder and Mission control. Some commercial features will be removed like JavaFX.

Java 8 had 350 methods deprecated, but never removed. JDK 9 removed six methods and one class (JavaBeans had a dependency on the desktop). JDK 10 removed 1 package, 6 classes, 9 methods and 1 field.

Compatibility not guaranteed in the future. Developers will have one release (six months) warning of deprecated.

Oracle JDK binary has LTS versions like 11, 17; Oracle OpenJDK does not.

Oracle JDK 11 has new license. Must have a paid-for license from Oracle for production for JavaSE. JDK 8 can be used forever for free, but without any further security patches and bug fixes.

JEP 310: Application Class-Data Sharing. Write java "schema" info to a file, to be read next time to speed startup.

73 New APIs, like the collections List, Set, Map get a static copyOf() method to get an immutable copy.

Project Amber, how to simplifying Java Language syntax. Kotlin is popular due to its clean syntax.

Primitives are good for performance, objects good for OO concepts

Can have collections of primitives

Zulu Enterprise - For money you can get backports of bug fixes and security patches from latest OpenJDK to previous releases.

What is the effect of Oracle's new licensing pricing on the cloud? Cloud providers will provide support.

No more free JDK 11 from Oracle.

Latest endpoint to connect Visual Studio to the Nuget.org repository is

.Net Core 2.0, to include an HTML fragment into a .cshtml page:

To prepare for Dependency Injection in .Net Core 2.0

How to convert a json string to a C# Object

How to create a log4net factory outside of Startup.cs for unit testing.

How to return async task for a unit test

C# -- to get prettyprint of json object with indentation:

To change the prompt in linux:

Posted by Mitch Fincher at 12:02 PM No comments:

You can clone it at https://github.com/fincher42/TDDWorkshopNunit.git

The theme of the workshop is from the movie "We Bought A Zoo".

Enjoy and leave me feedback below on how to improve the workshop.

Here's an outline of my notes:

This is the Red/Green/Refactor cycle.

One method of arranging your code is to have Arrange/Act/Assert sections in your test.

Posted by Mitch Fincher at 12:24 PM No comments:

I was giving a workshop on Test Driven Development today. Being a history nerd (don't get me started about the causes of the fall of the Roman Empire), I was reflecting back on how much has changed in software and how much hasn't. I started programming 42 years ago on punched cards. Here's my list of the most game changing developments in software in the last 40 years.

Being able to use Stackoverflow and its kin, we can peruse the minds of thousands of people and find a solution quickly. Online training courses are available to teach us the latest software. It's simply amazing how much more we can create and learn.

With punched cards at Texas Tech University in the fall of 1976, a diligent student could get in five compile/executes cycles a day. Five. Now you can do that in a few minutes. This changes the way we develop software. Instead of mapping out your entire program on quadral paper using the IBM flowchart template with a Pentel mechanical pencil, we can start programming and build the software iteratively.

Having an IDE that can pop-up all the available methods on an object is such a time saver. Having Resharper to refactor code on the fly, perfectly, is such an asset.

Test Driven Development encourages us to write software that is easy to test, but more importantly, it demands a layered architecture and encourages small modules. TDD gives us the courage to do massive refactoring. Thank you Kent Beck.

My major professor at Tech use to tell us about a principle of good software engineering, but follow it up with "But, of course, this doesn't matter if you have really good people." That is still true today. The heart of producing good software is excellent people with small egos who have a passion to hone their craft and cooperate with their peers.

Posted by Mitch Fincher at 7:11 AM No comments: